The manufacturing sector continued expanding in January, though at a slower rate, according to the Institute for Supply Management. The trade group’s index, based on surveys of industry purchase managers, grew for the eighth month in a row, but it decelerated for the second straight month. Survey respondents said the COVID-19 pandemic was hampering both hiring and logistics.

The non-manufacturing sector of the U.S. economy kept growing in January, at the fastest pace in nearly two years, according to the Institute for Supply Management. The trade group said its services index suggested expansion for the eighth month in a row after contracting in April and May for the first time in 11 years. Purchasing managers surveyed expressed increased optimism for business conditions and the economy despite some concerns about continued restrictions from the pandemic.

The Bureau of Economic Analysis reported a rise in motor vehicle sales in January. The pace rose to a 16.6 million vehicle annual rate, up for the third month in a row and the highest rate since 16.8 million in February. Sales of light trucks led the latest increase. Imported vehicles sold faster than domestics. Auto sales are an indicator of consumer spending, which drives about two-thirds of U.S. economic activity.

The four-week moving average for initial unemployment claims declined for the first time in four weeks, still reflecting historically high levels of joblessness. The moving average was more than double the average since records began in 1967 and more than quadruple the 51-year low set in February. The Labor Department said more than 17.8 million Americans claimed jobless benefits in the latest week, up from 2.1 million the year before.

The Bureau of Labor Statistics said worker productivity declined at an annual rate of 4.8% in the fourth quarter. The biggest drop since mid-1981 resulted from a 5.3% rate rise in output and a 10.7% rise in hours worked as businesses attempted to rebound from setbacks from the pandemic. On average, productivity rose 2.6% in 2020, the most in a decade but only because hours worked had fallen more than output.

Another sign of manufacturing’s comeback was a 1.1% rise in factory orders in December, the eighth consecutive gain. Orders remained 0.6% behind February’s level despite 1.3% gains in each of the three previous months, according to Commerce Department data. Compared to the year before, factory orders were down 6.6%. Excluding transportation equipment, they were down 3.8%. A proxy for business investments rose 1.8% from its year-earlier level.

The U.S. labor market continued its anemic comeback in January, adding 49,000 jobs after losing 227,000 in December, according to payroll data from the Bureau of Labor Statistics. Employers remained about 9.9 million jobs short of the level in February, on par with employment back in late 2015. The unemployment rate declined to 6.3% from 6.7% in December, down from a record 14.7% in April but up from 3.5% in February. More unemployed individuals are classified as permanent job losers rather than temporary layoffs, and nearly 40% have been without a job for six months or more. Of 7 million Americans out of the labor force who want to work, the pandemic kept 4.7 million from seeking a job. 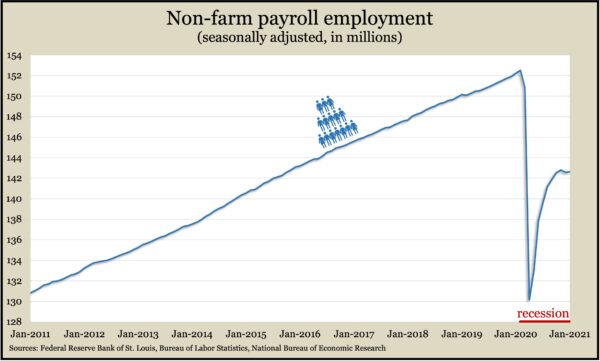 The U.S. trade deficit shrank 3.5% in December to $66.6 billion as the value of exports rose 3.4% while imports rose 1.5%. The Bureau of Economic Analysis said the full-year deficit widened 17.6% to $688 billion with both exports and imports declining from 2019 because of the global recession triggered by the pandemic.