a note on coronavirus volatility

Price increases for houses continued to accelerate in December, according to the S&P CoreLogic Case-Shiller home price index. Year-to-year price growth for the 20-city composite index rose 2.9% from December 2018, up from a 2.5% rate in November. Before picking up pace for five consecutive months, the year-to-year price increase had slowed for 18 months. While hesitating to declare it a trend, an economist for S&P said the data suggested continued stable growth for the housing market.

The Conference Board said its February consumer confidence index rose slightly from January. The business research group said feelings toward current conditions soured a little while optimism for near-term prospects improved. Economists see consumer confidence as a precursor to increased consumer spending, which the Conference Board said should continue to support the U.S. economy at least in the short run. Consumer spending accounts for more than two-thirds of U.S. gross domestic product.

Another indication that the housing market still has legs was a Commerce Department report that January new home sales rose to their fastest pace since July 2007. The annual rate of new houses sold eclipsed the 57-year average for the eighth month in a row, nearly 8% faster than December and almost 19% above the year-ago rate. The supply of new houses for sale dwindled to its lowest point since November 2017. Real estate professionals have griped that a lack of inventory has been raising prices out of reach for many wannabe home buyers. 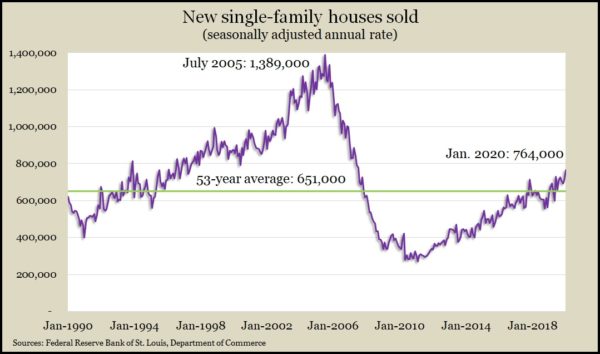 The U.S. economy grew at a 2.1% annual rate in the fourth quarter, unchanged from both the third quarter and a preliminary report. The Bureau of Economic Analysis said additional data showed businesses setting aside more inventories than initially estimated but that was offset by a greater decline in business investments. For all of 2019, the gross domestic product rose 2.3%, down from 2.5% in 2018 and the slowest growth in three years. The Federal Reserve’s preferred measure of inflation rose 1.6% since the fourth quarter of 2018, remaining below the target rate of 2%.

U.S. manufacturing continued to show weakness in January as durable goods orders declined 0.2%, according to the Commerce Department. Transportation equipment orders led the decline. Excluding the volatile category, orders rose 0.9% from December and were unchanged from January 2019. A measure that indicates business investments rose 1.1% for the month and was up 1.4% from the year before.

The four-week moving average for initial unemployment claims rose for the second time in three weeks, though still staying 40% below the 53-year average. Labor Department data continued to suggest an extended reluctance by employers to let go of their workers. Economists say the tight labor market has been fueling the confidence that should lead to further consumer spending.

Pending contracts for existing house sales rose 5.2% in January, higher than analysts expected and a rebound from a 4.9% decline in December, according to the National Association of Realtors. Year-to-year, contract signings rose 5.7%. The trade association credited lower mortgage rates and a sound economy for increased activity. Noting that inventories for the past couple of months were the lowest since 1999, the group said the supply of housing needs to keep up with demand in 2020.

Consumer spending rose 0.2% in January while personal income rose 0.6%, the most in 11 months, according to the Bureau of Economic Analysis. Income rose in part because of new minimum wage increases that took effect in 21 states. As a result of income rising faster than spending, the personal saving rate rose to 7.9% of disposable income, up from 7.5% in December. The January measure of the Fed’s preferred inflation gauge rose 1.6% from January 2019.

The University of Michigan consumer sentiment index neared its expansion high in February, rising to 101, just shy of the recent peak of 101.4 in March 2018. A university economist said 8% of survey respondents mentioned the COVID-19 coronavirus as weighing into their economic expectations. However, that rose to 20% of the consumers interviewed Monday and Tuesday when stock markets sold off on concerns about the infectious virus.