The National Association of Realtors reported lower sales of existing houses in January, blaming tighter supplies and price increases that are outpacing inflation. The trade group said Realtors sold an annual rate of 4.8 million houses, 4.9% off the December rate but up 3.2% from the year before. Sales reached nearly 7.3 million a year in 2005, before the housing bubble burst.

Further evidence of America’s faltering housing recovery turned up in the S&P/Case Shiller home price index, which showed year-to-year house prices up 4.5% in January, which us up slightly from December but a far cry from the peak of 13.8% in November 2013. A housing economist with Standard & Poor’s cited weakness in new home construction and sales as signs that the sector’s recovery is losing steam even as job markets have been improving and interest rates remain low.

The Conference Board reported that consumer confidence in February fell from its highest level in the economic recovery. The business research group noted that consumers still thought better of current conditions as well as future prospects than before the recession. The fall in confidence was explained more as fewer consumers expecting improvements than a rise in anticipation that matters would get worse.

New home sales fell in January after an upwardly revised December figure, which was the highest annual rate since June 2008, according to the Commerce Department. The sales rate reached 481,000 units, exceeding analyst expectations, though it remained well below the average sales rate of 656,000 houses per year since 1963. The median sales price rose 9.1% from the year before. 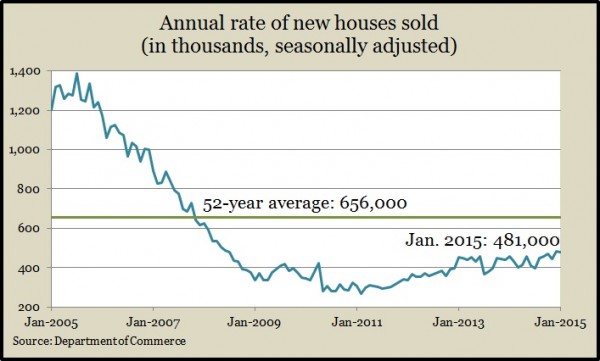 The broadest measure of inflation, the Consumer Price Index, declined in January for the third month in a row and at the widest margin. An 18.7% drop in gasoline prices led the contraction, the Bureau of Labor Statistics reported. Even excluding volatile food and fuel prices, the index fell. The year-to-year inflation rate sank 0.1%, suggesting the Federal Reserve can afford to continue to be patient about raising short-term interest rates.

January orders for durable goods rose more than expected, gaining for the first time in three months, based on a Commerce Department report. Demand for non-defense capital goods excluding aircraft, an indicator of business investments, also ticked up for the first time since October.

Employers continued to be reluctant to let workers go as the moving four-week average for initial unemployment claims remained below its historic average, although the level itself increased for the first time in five weeks. Labor Department data show the four-week average hovering around where it was before the 2008 financial collapse.

Economic growth slowed to a 2.2% annual rate the last three months of 2014, vs. a robust 5% in the third quarter, the Bureau of Economic Analysis announced. A second estimate of Gross Domestic Product found inventories weren’t building as fast as initially thought, and the trade gap was widening more. Consumer spending, which drives 70% of U.S. growth, rose 4.2% in the fourth quarter, the most in four years. And the Fed’s favorite measure of inflation increased 1.1% year-to-year, below the Fed target of 2%.

Consumer sentiment improved from a mid-month estimate but still fell from January, according to the University of Michigan and Thomson Reuters. Considered a leading indicator of consumer spending, the sentiment index narrowed to 95.4 from an 11-year high of 98.1 in January. The February reading still tied with December for being the second-highest in eight years.