Retail sales rose in January for the first time in four months to a record high with all 13 categories reporting increased revenue. The Commerce Department said total sales rose 1.3% from December following the latest federal stimulus payments. While all retailers were up 7.4% from the year before, online sellers were up nearly 29% while bars and restaurants were down almost 17%. 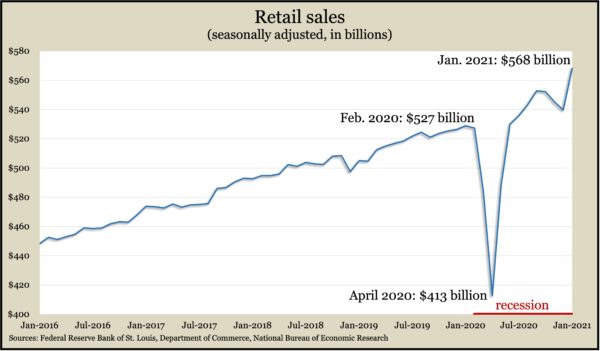 The Federal Reserve reported continued gains in industrial production in January, although output remained below levels in February, before the pandemic caused widespread lockdowns. Production rose for the fourth month in a row but was still 1.8% behind where it was the year before. Industries’ capacity utilization rate, an early indicator of inflation, rose to 75.6%, up from an all-time low of 64.2% in April but down from 76.9% in February. The long-term average rate of 79.6% hasn’t been met since April of 2008.

Inflation on the wholesale level rose 1.3% in January, the largest gain since the Bureau of Labor Statistics reconfigured its Producer Price Index in 2009. A 13.6% increase in gasoline prices boosted the index, as did increased costs for financial services and health care. Compared to the year before, the index showed an inflation rate of 1.7%, the highest since hitting 2% in January 2020. The core rate of wholesale inflation, stripping out volatile prices for the categories of food, energy and trade services, rose 1.2% for the month and 2% from the year before.

The housing industry continued to be a bright spot in the economic recovery. The annual rate of single-family building permits rose to 1.27 million in January, its highest level since August 2006, according to data from the Commerce Department. Furthermore, the annual rates of single-family houses completed and under construction were at their highest levels since November 2007. Headline numbers on monthly volatile permits and housing starts underplayed the strength of the housing sector. The annual rate of permits rose 10.4% from December, and starts declined by 6%. 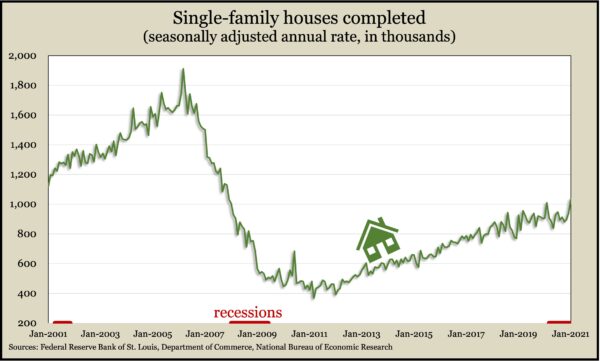 The four-week moving average for initial unemployment claims declined to 833,250, down the second week in a row after rising in eight of the previous nine weeks. While the rolling average of new jobless applications stayed below the record 5.7 million in mid-April, it remained above the 54-year record before the pandemic and was more than quadruple the 51-year low of 208,000 last February, according to Labor Department data. The volatile weekly number of new applications rose for the second week in a row.

With mortgage rates at record lows and the pandemic driving work-from-home trends, existing home sales rose to an annual rate of 6.69 million in January, up 0.6% from December’s pace and 23.7% higher than in January 2020. The National Association of Realtors said low inventories are holding back sales, with the number of houses for sale sinking to a record low of 1.04 million. With high demand and low supply, prices continued to rise. The median sales price was $303,000, up 14.1% from the year before for the 107th consecutive month of year-to-year price increases.