U.S. employers posted 6.4 million job openings at the end of December, the least in two years. Openings reached a record 7.6 million positions in November 2018. The Bureau of Labor Statistics reported that openings continued to outnumber job seekers, which had never happened before March 2018. The gap between postings and unemployed in December was the narrowest since March 2018. Unmet demand for workers should continue to pressure for wage raises and encourage more consumer spending, which drives about 70% of U.S. economic growth. 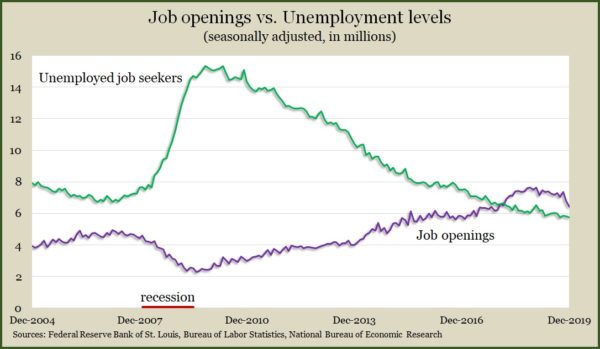 The broadest measure of inflation rose 0.1% in January as higher costs for shelter, food and health care offset a 1.6% drop in gasoline prices. The Consumer Price Index increased 2.5% from January 2019, the Bureau of Labor Statistics reported, up for the fourth month in a row, reaching the highest level since October 2018. Excluding volatile food and energy items, the core CPI rose 2.3% from January 2019, the same rate as the three previous months. The core inflation rate has been 2% or higher since March 2018.

The four-week moving average for initial unemployment claims was unchanged following five consecutive weeks of decreases. The Labor Department indicator was 40% below the 53-year average, suggesting employers continue to be reluctant to let workers go. That should sustain demand for workers and continue to promote higher wages.

Business inventories grew by 0.1% in December following a 0.2% decline in November, according to a separate Commerce Department report. December sales shrank 0.1%, suggesting that demand is dropping while businesses are increasing supplies. The inventories-to-sales ratio—an indicator of how lean businesses are operating—remained at levels last seen in late 2014 and at the end of the Great Recession. Year-to-year, inventories rose 2.2% outpacing sales, which rose 1.7%.

The Federal Reserve reported that industrial production declined 0.3% in January, weighed down by weaker output of aircraft at Boeing Co. and unseasonably warm weather cooling production at utilities. Overall output was down for the fourth time in five months, although factory production would have been up for the third consecutive month if not for Boeing’s woes with its 737 Max. Capacity utilization shrank to 76.8%, further distancing itself from the long-term average of 79.8%, which hasn’t been reached in almost 12 years, suggesting little inflationary pressure.

The University of Michigan’s preliminary February consumer sentiment index rose to its second-highest level of the economic expansion. More consumers reported net gains in household income and wealth than at any point in 60 years of surveys. An economist with the index noted a “faint stirring of two powerful sources of uncertainty,” with 7% of respondents mentioning the coronavirus as a consideration in their economic expectations and 10% mentioning national elections.