Purchasing managers outside of the manufacturing industry told the Institute for Supply Management that their businesses were expanding in November for the 82nd month in a row. In fact, the ISM non-manufacturing index grew at the fastest pace in a year. Although new orders expanded at a slower rate than in October, the key component grew for the 88th consecutive month. The trade group said its index suggests the U.S. economy is growing at an annual rate of 3.3% adjusted for inflation.

The gap between what the U.S. sells abroad and what it buys from other countries widened more than analysts expected in October. The trade deficit jumped nearly 18% to $42.6 billion, the highest level in 19 months, according to the Bureau of Economic Analysis. Exports, hampered by the strong dollar, declined 1.8% while imports rose 1.3%. A bright spot in the report was a record level of services exported, reflecting overseas demand for U.S. technical and management expertise.

One concerning aspect of the moderately growing U.S. economy is sluggish productivity. Lack of output per hour worked makes it harder for companies to boost profits and raise the wages that fuel the consumer spending that drives nearly 70% of the GDP. The Bureau of Labor Statistics reported that productivity increased at a 3.1% annual pace in the third quarter, the first gain in four quarters. Measured year-to-year, productivity was unchanged, compared to a post-war average of 2.2% per year.

The beleaguered manufacturing sector got good news as factory orders increased in October for the fourth month in a row. Commercial aircraft led the growth, according to the Commerce Department, and non-transportation orders gained for the third consecutive month. Year-to-year, though, factory orders were down 2%, and a proxy for business investments declined 4%, which some economists blame for part of the drop-off in productivity.

Employers hovered near the record set in July for the most job openings. The Bureau of Labor Statistics said October openings fell 1.7% from September. But only minor changes in the number of openings, hires and quits suggest continued steady demand for workers, which could lead to higher wages.

The Federal Reserve reported that credit card debt continued rising in October, up the ninth month in a row and the 18th time in 19 months. Seen as a sign of consumer confidence, credit card debt rose to its highest level since March 2009. Still, total revolving debt, as it’s called, remains more than 4% below its peak set just before the financial crisis eight years ago.

The moving four-week average of initial unemployment claims rose for the second week in a row, though it’s still 30% below the 49-year average, according to the Labor Department. Another sign of employer demand, the persistent lack of jobless applications suggests companies are reluctant to let workers go, which also could eventually build pressure for wage increases. 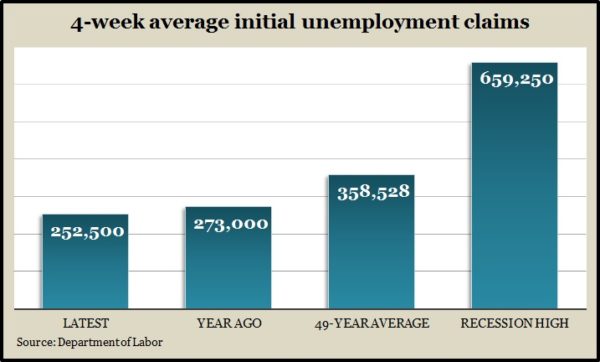 Consumer sentiment rose notably in a preliminary reading of December surveys by the University of Michigan. The sentiment index was just shy of its post-recession peak reached last year, which was the most optimistic signal from consumers since 2004. An economist with the survey cited an extraordinary anticipation that upcoming economic policies would benefit consumers. He warned that excessive expectations and disappointing economic growth could result in a setback.

A months-long trend in stockpile cutbacks continued in October with a 0.4% decrease in wholesale inventories, according to the Commerce Department. Because sales at the wholesale level rose 1.4% for the month, the ratio of inventories to sales fell to its lowest point since early 2015. The ratio, which indicates how leanly businesses are operating, remains at levels reached toward the end of the Great Recession.