The manufacturing index of the Institute for Supply Management fell in December, marking the fourth month in a row of contraction for the industry. The index, based on surveys with purchasing managers, suggested the U.S. economy was growing at an annual pace of 1.5%. Most components of the index showed a slightly faster pace of contraction, although production was shrinking less.

The annual rate of construction spending declined 0.8% in October, a 1.1% advance from October 2018. Housing spending, including home improvements, fell 0.9% for the month but rose 0.5% from the year before, according to the Commerce Department. Government spending on construction edged down 0.2% from September and rose 10.2% year-to-year.

The pace of motor vehicle sales accelerated 3.4% in November. Dealers sold an annual rate of 17.1 million vehicles, according to the Bureau of Economic Analysis. Vehicle sales declined 1.7% from the year-ago pace. Light trucks, including sports utility vehicles, accounted for a record 73.8% of sales. Sales of domestic vehicles, which made up 78% of total sales, rose 4.7% from the October pace but were down 1.1% from the year before.

The larger service-oriented sector of the U.S. economy continued to expand in November for the 118th consecutive month, though at a slower rate. The ISM non-manufacturing index declined to a reading of 53.9, below the 12-month average, but components for new orders, employment and exports all showed stronger growth. Purchase managers surveyed expressed continued concerns about trade tensions as well as staffing constraints.

The U.S. trade deficit narrowed 7.6% to $47.2 billion in October, the smallest gap since May 2018. The Bureau of Economic Analysis said exports, hampered by a strong U.S. dollar and soft global economy, declined 0.2%. Imports fell 1.7%, including consumer items from China that are scheduled for increased tariffs Dec. 15. Through the first 10 months of 2019, the trade deficit widened by 1.4% from the year before and was on track for the biggest gap since 2008.

The four-week moving average of initial unemployment claims fell for the second week in a row and continued to hover near the lowest point since 1969. The jobless applications average remained 38% below the 52-year average, according to Labor Department data. The indicator suggests a tight employment market in which employers do not want to let workers go, which should encourage consumer spending.

The Commerce Department reported that factory orders rose in October for the first time in three months. Excluding volatile orders for transportation equipment, orders rose just 0.2% year-to-year. Excluding defense orders, demand declined 0.5% from October 2018. A proxy for business investments, which has been lagging economic expansion among uncertainties over global trade, rose 0.8% from October 2018.

U.S. employers added 266,000 jobs in November, above the year-to-date average of 180,000 and 223,000 per month in 2018, according to the Bureau of Labor Statistics. The economy extended its record length of job gains to 110 months in a row. Average hourly wages rose 3.1% from November 2018, staying above the 3% mark for the 15th month in a row after more than nine years below that mark. Economists have been waiting for fatter wage growth, considering the low unemployment rate, which reached a 50-year low of 3.5%. 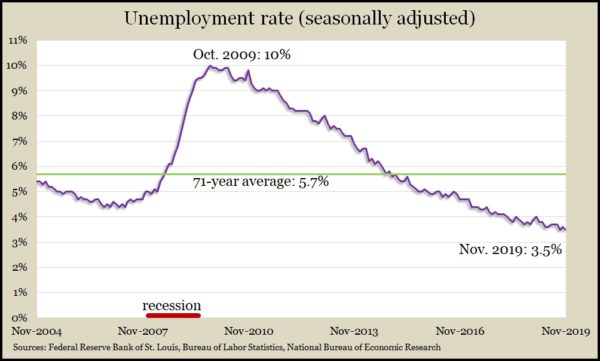 Consumers expressed greater enthusiasm for current economic conditions and higher expectations for the near term, according to a longstanding University of Michigan survey. Overall, consumer sentiment was up 2.5% from where it ended November, ranging on the high side of the longest period of optimism in more than 20 years. Upper-income households reported near-record gains in wealth, thanks to stock prices and low expectations for inflation.