A “still hot” housing market could be starting to suffer from affordability problems, according to the National Association of Realtors. The trade group’s pending home sales index declined in October for the second month in a row, although it still was 20.2% higher than in October 2019. An economist for the association explained that with both inventories and mortgage rates at historic lows and demand exacerbated by work-from-home trends, prices are rising to a point of excluding more wannabe buyers.

The manufacturing sector expanded for the sixth month in a row in October, although at a slower pace, according to the Institute for Supply Management. The ISM Manufacturing Index continued to rebound from its lowest reading in 11 years in April following widespread lockdowns from the COVID-19 pandemic. Purchasing managers surveyed for the index reported increasing disruptions in staffing both in their own plants and among suppliers as coronavirus cases have surged again. Employment actually contracted from September.

The annual rate of construction spending rose 1.3% in October after a setback of 0.3% in September, the Commerce Department reported. Spending on residential construction rose 2.9% for the month and was 14.7% higher than the year before. Overall construction spending increased 3.7% from October 2019. Categories in which building expenditures declined both for the month and the year included hotels, churches, amusement facilities, offices and manufacturing.

The four-week moving average for initial unemployment claims continued receding from historic highs, dipping below 740,00 for the first time in 36 weeks. That still was twice the level from the year before and higher than the all-time record set before the pandemic. The Labor Department said nearly 20.2 million Americans were receiving jobless benefits, up from 1.6 million at the same time last year.

The U.S. service sector recovery slowed for the second month in a row in November, according to the Institute for Supply Management index of non-manufacturing activity. The survey-based index showed the largest part of the U.S. economy expanding for the sixth month in a row after contracting in April and May. Restaurants reported continuing struggles under capacity limits. Other businesses said they remained cautious as COVID-19 cases increased.

The labor market recovery continued to slow in November, adding 245,000 jobs, while the unemployment rate declined to 6.7%, the Bureau of Labor Statistics reported. The jobs gain narrowed for the fifth month in a row. Employers remained 9.8 million jobs below where they were before the pandemic, about level with the number of jobs five years ago. Among the unemployed, 36.9% had been out of work for 27 weeks or more, nearly twice the level in February. The BLS said another 3.9 million Americans didn’t count as unemployed because the pandemic has kept them from looking for work. 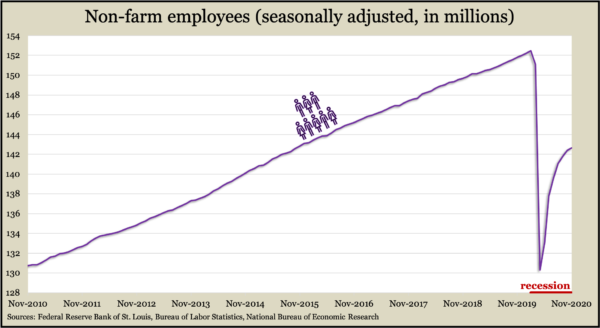 The Commerce Department said manufacturing continued to recover in October with a 1% increase in factory orders, the sixth gain in a row. Led by a rise in aircraft orders in October, commitments to manufactured goods still lagged their levels in February by 2.1%. Year to year, factory orders were down 7.9% and down 4.8% excluding transportation equipment. A proxy for business investment was up 0.2% from the year before.