Housing prices continued to track much higher than overall inflation in October. The S&P CoreLogic Case-Shiller national index rose 19.1% from its year-earlier measure, down from 19.7% in September and 20% in August, which was the highest year-to-year increase in 34 years of data. An economist with the index said the latest data provided more evidence that COVID-19 has helped push more urban apartment dwellers to buy homes in the suburbs. He also noted that such a movement might have happened eventually anyway. 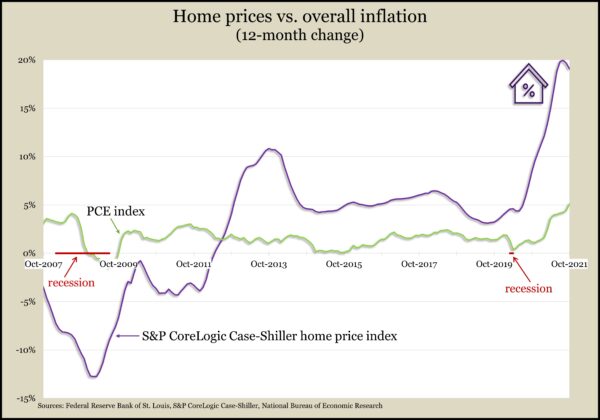 The National Association of Realtors blamed “exorbitant prices” and low inventory for a decline in demand for home purchases in November. The trade group’s tracking of contract signings, the pending home sales index, fell 2.2% from October and was down 2.7% from November 2020. An economist for the Realtors said prospective homebuyers have become more hesitant because of high prices. He said he expects housing supply to improve in 2022, which should help affordability by slowing price gains.

The four-week moving average for initial unemployment claims dropped to its lowest point since October 1969. The measure of employers’ willingness to let workers go was 5% below its nadir heading into the pandemic. It was 46% under the 54-year average, according to Labor Department data, and down from a record high of 5.3 million average claims in April 2020. More than 2 million Americans claimed unemployment compensation in the latest week, up 1.8% from the week before but down from 20.4 million the year before.