Signs that the post-recession housing expansion is waning showed up in a Commerce Department report. Although the pace for both housing starts and building permits  picked up in November, multi-family residences led the boost while the more economically significant single-family starts and permits declined from year-ago rates. The annual rate of newly built single-family houses fell to its lowest level in 15 months and remained behind the 50-year average pace. 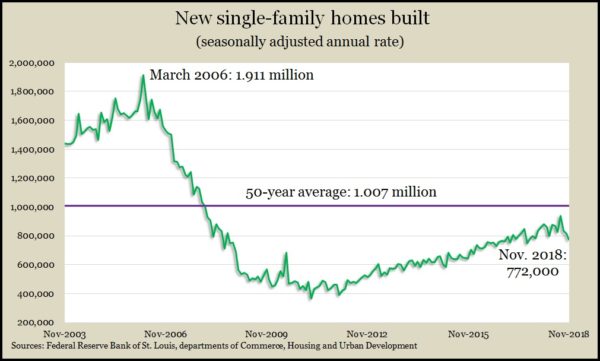 Sales of existing houses – the bulk of the residential market – grew at a faster-than-expected pace in November, gaining for the second month in a row, according to the National Association of Realtors. However, the sales pace of 5.32 million houses fell 7% on a year-to-year comparison and remained on track to be lower in 2018 than in 2017. The trade association has forecast 2019 sales to inch even lower.

The policy-making body of the Federal Reserve Board decided to nudge up the interest rate on short-term rates to between 2.25% and 2.5%. The move was the fourth increase by the Fed in 2018 and the ninth since Dec. 2015 to gradually back off on the monetary stimulus it provided the U.S. economy since the financial collapse of 2008. The Federal Open Market Committee indicated that a majority of its members are considering possibly two more interest rate increases in 2019.

The four-week moving average for initial unemployment claims fell for the second week in a row and the third time in seven weeks, remaining near the lowest level since late 1969. According to data from the Labor Department, jobless applications have been below the 51-year average every week since early 2013, indicating that employers are cautious about letting workers go. That helps support a stronger job market, which should encourage more consumer spending.

The index of leading economic indicators rose 0.2% in November, rebounding from a 0.3% decline in October, both months hampered by stock market volatility. Still, a “solid” rate of growth in the gross domestic product should help perpetuate moderate economic gains into 2019, the Conference Board said. Otherwise, the index from the business research group suggested tapering off in the second half of the new year.

The broadest measure of U.S. economic growth – the gross domestic product – rose at an annual rate of 3.4% in the third quarter, the Bureau of Economic Analysis reported. That was down from an earlier 3.5% estimate but still the strongest third quarter since 2014. Compared to the earlier estimate, consumer spending, which drives about 70% of economic activity, wasn’t as strong. Residential investments and net exports were bigger drags on the economy than initially estimated. The Federal Reserve Board’s favorite measure of inflation came in at 1.6%, below the target of 2% annual growth, allowing the Fed more leniency in further interest rate increases.

Durable goods orders registered their first gain in three months in November, led by increased sales of aircraft, particularly to the military. Excluding the volatile category of transportation equipment, orders declined. Year-to-year, orders overall rose 8.4%, with a 7.3% rise excluding transportation. A tell-tale sign of business investment fell for the third time in four months and was up 6.4% from November 2017, suggesting a continued lag in spending that some economists have blamed for holding back productivity.

The Bureau of Economic Analysis said personal spending rose 0.4% in November, half the rate it advanced in October. Personal income rose o.2% in November, vs. 0.5% in October, lowering the personal saving rate to 6% of disposable income, down from as high as 6.8% in April. In the same report, the Federal Reserve’s favorite measure of inflation showed a 1.9% increase, up from 1.8% in October.

The University of Michigan consumer sentiment index rose more than analysts expected in December, capping off the highest average annual sentiment for a year since 2000. A University of Michigan economist said consumers showed little concern for recent stock sell-offs compared to interests in personal income and job prospects. For the first time in two years, consumers said they saw more negative than positive news about employment possibilities.