Home building continued to expand in November, according to the Commerce Department. The annual rate of housing starts grew 3.2% from October to nearly 1.37 million houses. The rate was 13.6% higher than the year before. New single-family units outpaced multi-family units, which should begin to help address a shortage of houses for sale. Building permits for single-family houses rose for the seventh month in a row, reaching their highest level since July 2007.

The resumption of work at General Motors following a strike by the United Auto Workers boosted November industrial production higher than analysts expected. Even excluding the automotive industry, manufacturing output grew for the first time in three months but remained lower compared to the year before, according to the Federal Reserve. Capacity utilization, which indicates inflationary pressure, stayed relatively weak. 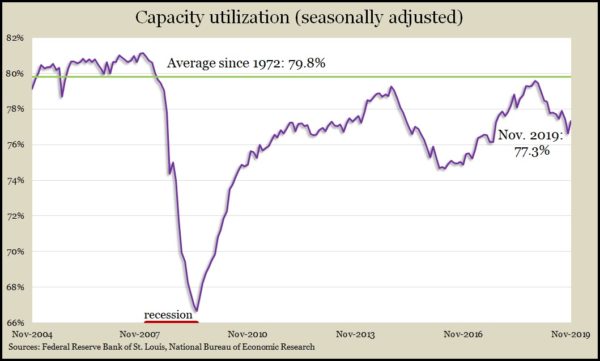 Signs of a historically tight labor market persisted in October with job openings rising to nearly 7.3 million, up 3.3% from September. According to data from the Bureau of Labor Statistics, job openings outnumbered the number of unemployed people looking for work for the 20th consecutive month.

The National Association of Realtors reported selling an annual rate of 5.35 million existing houses in November, down 1.7% from October’s pace. The trade association said low inventory would cause a continued “choppy” sales market. The inventory of houses on the market declined for the fifth month in a row to the lowest level since February. The median sale price rose 5.4% for the 93rd consecutive year-to-yer increase.

The moving four-week average for initial unemployment claims rose for the second week in a row and the fifth time in seven weeks but remained 36% below the 52-year average, according to data from the Labor Department. Employer reluctance to let workers go should encourage consumer spending.

The index of leading economic indicators was unchanged in November, following three months of declines. The Conference Board said weakness in manufacturing and labor indicators offset stronger housing starts, higher stock prices and an improved consumer outlook. The business research group said its index suggests growth in the gross domestic product should stabilize around 2% in 2020

Consumers spent at a brisker rate than previously estimated in the third quarter, but the U.S. economy still grew at a 2.1% annual pace. The Bureau of Economic Analysis said in its final look at the quarter’s gross domestic product that consumer spending rose at a 3.2% annual rate, up from an earlier report of 2.9% but down from 4.6% in the second quarter. Increased consumer input offset lower-than-estimated inventory growth. Business investments didn’t decline quite as much as initially reported.

The Bureau of Economic Analysis said personal spending rose 0.4% in November, just behind the 0.5% increase in personal income. The spending pace suggested continued momentum for the GDP component accounting for about 70% of the nation’s economic activity. In the same report, the Federal Reserve’s favorite measure of inflation showed a 1.6% year-to-year increase, down from 1.7% in October and still below the Fed’s target rate of 2%.

Consumers further raised their confidence in December, according to the longstanding consumer sentiment survey from the University of Michigan. Gains in optimism were led by higher-income households, and the expectations for inflation over the next five years were at the lowest levels in 40 years of data.