Recovery in U.S. industrial output rose in November for the seventh time in eight months, the Federal Reserve reported. Total production was still 5% below February, before the COVID-19 pandemic disrupted demand, supply chains and operations. Manufacturing, especially automakers, led the 0.4% gain in total production in November. Warmer-than-normal weather lowered output from utilities for the third time in four months. Mining production grew but was down 12.5% from the year before. Capacity utilization rose to 73.3%, up from a record low 64.2% in April but down from 76.9% in February. Lower capacity usage suggests less pressure for inflation, and the rate hasn’t hit the long-term average since April 2008. 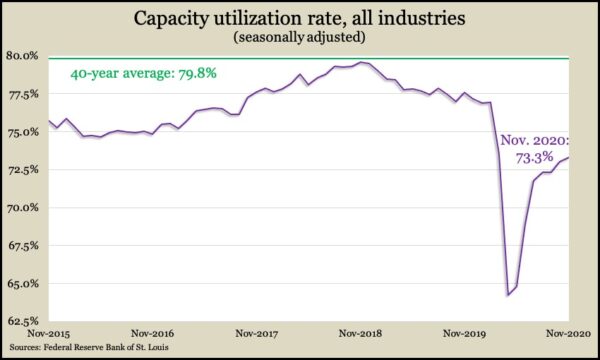 With consumer spending accounting for more than two-thirds of U.S. economic output, retail sales in November sent a concerning signal, declining 1.1% following a slight decrease in October. The setback was broadly distributed, with 10 of 13 categories declining. The Commerce Department reported that over all, retailers continued to have seasonally adjusted sales above the level before the pandemic, but some outlets, such as bars and restaurants, kept falling behind. Others, such as online retailers, were thriving. 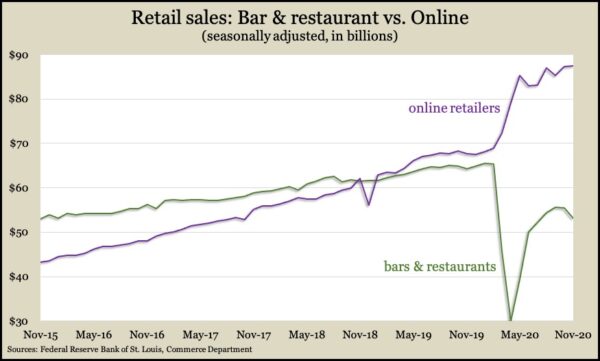 The four-week moving average for initial unemployment claims rose for the third time in four weeks to 812,500 applications, the Labor Department said. The level was down from a record of nearly 5.8 million in April and up from a 51-year-low of 208,000 in February. More than 20.6 million Americans were receiving jobless benefits, up 8.4% from the week before, compared to 1.8 million at the same time last year.

The housing industry continued to be a bright spot in the U.S. economy as the annual rate of both housing starts and building permits rose in November. Over all, new residential construction remained below the pre-pandemic pace in February, but Commerce Department data showed starts for single-family houses rising to the fastest pace since April 2007. Permits, which indicate plans for future housing, rose to their highest annual rate since September 2006. The 1.3% gain in the rate of single-family permits was the slimmest of seven consecutive increases.

The Conference Board’s index of leading economic indicators rose 0.6% in November, slightly less than gains in October and September. The business research group noted a deceleration in improvements that suggests a “significant moderation in growth” for the U.S. economy to begin 2021. Recent advances in COVID-19 cases raised concerns, the group said, given declining factory hours and fallen consumer confidence. On the bright side, it cited positive developments in new factory orders, housing permits and stock prices.