U.S. consumer debt rose in October for the second month in a row, though it was still behind the peak reached in February, the Federal Reserve reported. The rise relied on continued borrowing for automobiles and student tuition. However, credit card debt dipped for the seventh time in eight months, sinking to its lowest level since June 2017. Credit card curtailment can be troubling for an economy that relies heavily on consumer spending. During the Great Recession, credit card debt crested in May 2008 and didn’t recover until January 2018. 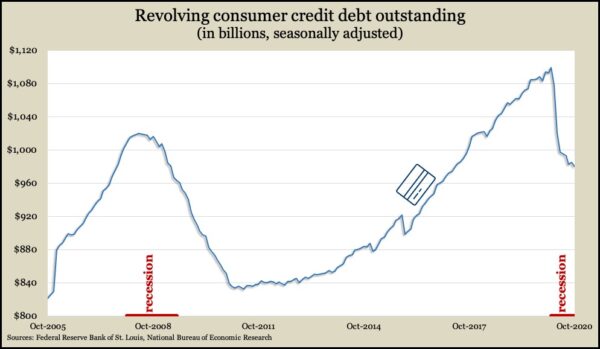 U.S. employers posted 6.65 million job openings in October, the fifth increase in six months, according to the Bureau of Labor Statistics. Openings were up 33.1% from their recent low in April but still 5% below February, when the pandemic recession began. Separate reports showed more than 11 million unemployed Americans in October, suggesting a challenging gap between supply and demand of workers. The job openings report also showed a decline in hiring from September and a gain in the number of workers separated from their jobs. 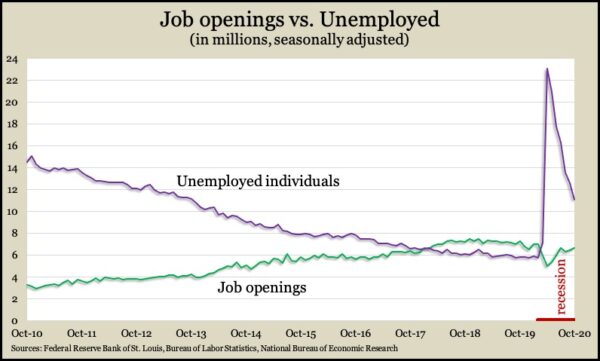 In another sign that the labor market recovery was losing steam, the four-week moving average for initial unemployment claims rose for the second time in three weeks. The 776,000 average was a fraction of the peak of nearly 5.8 million in April but up from a 51-year low of 208,000 in February. Outside the pandemic, the latest level would be the highest in Labor Department data going back to 1967.

The broadest measure of inflation rose 0.2% in November following no change in October and continued to suggest economic weakness. The Bureau of Labor Statistics said its Consumer Price Index grew at a 12-month rate of 1.2%. It rose 1.6% excluding volatile prices for food and energy. Both measures were unchanged from October and remained below the target of 2% inflation identified by the Federal Reserve.

Inflation on the wholesale level continued to rebound in November as the Producer Price Index gained 0.1%, the seventh increase in a row but at a lower rate for the second consecutive month. Excluding volatile costs for food, energy and trade services, the core PPI also rose 0.1%, the Bureau of Labor Statistics reported. Since November 2019, wholesale inflation overall rose 0.8%, the highest since February, while the core rate rose 0.9%, the most since March.

A preliminary look at consumer sentiment in December found improved assessments of current economic conditions as well as rosier expectations for the near future. Surveys through the University of Michigan suggested partisan shifts in optimism were higher than expected, especially considering economic fundamentals. An economist with the survey noted similar findings after the 2016 presidential election.