The ISM Manufacturing Index suggested the industry continued expanding for the fifth month in a row in July following five months of contraction. New orders grew, although at a slightly slower rate than in June, while employment contracted. Export orders expanded for fifth month in a row, a hopeful trend for a thaw in demand abroad.

The Commerce Department said construction spending declined in June, the fourth consecutive fall. Spending on residential construction was flat in June, although up 2.6% from June 2015, led by multi-family housing. The overall spending level is higher than just prior to the recession, but both business and government sectors are spending less than a year ago. 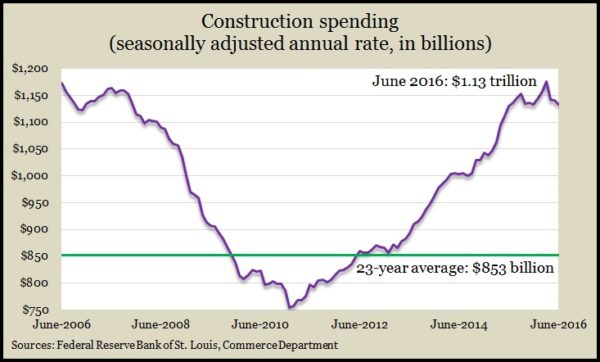 The consumer remained a bright spot for the moderately growing U.S. economy in June as personal spending rose 0.4% for the second month in a row, outpacing the 0.2% gain in income. The personal saving rate decreased as a result to 5.3%, the lowest in 15 months. The Fed Reserve’s favorite inflation indicator stayed at an annual rate of 1.6% for the fourth month in a row. The rate has stayed below the Fed’s 2% target since 2012.

One sign of consumer spending is the highest number of motor vehicle sales since November. Dealers sold an annual pace of 17.9 million cars and trucks in July, according to Autodata Corp. That was a 7% increase from the June rate and 2% ahead of July 2015. Truck sales continued to outpace cars, with domestic models gaining more in July but imports leading the race in the last year.

Non-manufacturing industries, which directly account for about 90% of the U.S. economy, expanded for the 78th month in a row in July. According to the Institute for Supply Management, non-manufacturing companies reported slower growth, although new orders increased at a faster rate. Purchase managers expressed optimism in the business climate as well as the direction of the economy.

An approximation for business investments barely advanced in June, for the first time in three months, according to a Commerce Department report on factory orders. Orders overall declined 1.5% from May, accelerating from a 1.2% setback from April. Year-to-year, pulled down by business uncertainty and a global slowdown, factory orders were 2.6% lower.

U.S. employers added more jobs than expected in July, according to a report from the Bureau of Labor Statistics. The closely watched employment situation report showed payrolls expanding by 255,000 jobs, vs a 12-month average of 206,000 jobs per month. Mining employment continues to decline amid global economic slowing, but employers benefiting from U.S. growth such as health care, leisure and professional services kept hiring. The unemployment rate stayed at 4.9%, and wage increases remained at a year-to-year rate of 2.6% following three months of raises.

The U.S. trade deficit widened more than expected in June to $44.5 billion, according to the Bureau of Economic Analysis. Exports rose by 0.3%, hampered by a global glut of oil and the effects of a strong U.S. dollar, which makes American goods more expensive abroad. Imports rose by 1.9%, suggesting U.S. consumers are taking advantage of currency rates to buy more foreign-made items.