No major releases or announcements

Consumer spending, which accounts for more than two-thirds of U.S. economic activity, rose 0.3% in June, down from 0.5% in May and 0.6% in June. The Bureau of Economic Analysis reported that personal income outpaced spending in June, rising 0.4% for the fourth month in a row. As a result, the personal savings rate rose to 8.1%, up from 8% in May. Also in the report, the Federal Reserve’s preferred measure of inflation showed a year-to-year gain of 1.6%, following three consecutive gains of 1.5%. The indicator has reached the central bank’s target of 2% rarely in the past 10 years. 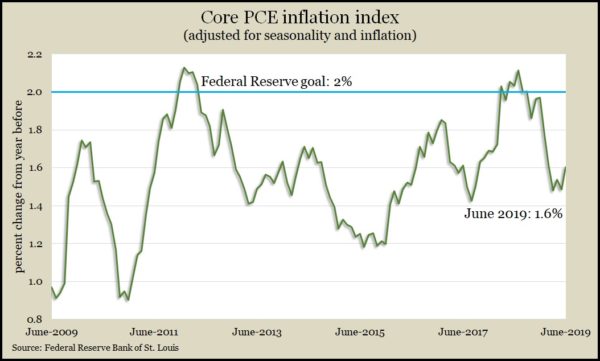 A gradual slowdown in housing price increases continued in May, according to the S&P CoreLogic Case-Shiller index. Home prices in the 20-city composite index grew 2.4% from May 2018. That’s down from 2.5% growth in April and the smallest increase since August 2012. Still, home prices continued to outpace broader inflation.

The National Association of Realtors said its pending home sales index rose 2.8% in June, the second consecutive monthly gain. Year-to-year, the index was up 1.6%, the first increase after 17 consecutive declines. An economist for the trade association expressed optimism for the real estate market, based on strong job and stock markets, low mortgage rates and rising home values.

Consumer confidence rebounded much more than analysts expected in June, with attitudes improving toward both current conditions and the near future, according to the Conference Board. The business research group said its monthly index suggested consumers could support “robust” spending in the months ahead, despite expect signs of slowing economic growth.

As anticipated, the Federal Open Market Committee cut short-term interest rates, saying it wanted to support what it sees as a favorable outlook for the U.S. economy. In particular, the Fed said it hopes to boost the annual inflation rate closer to its 2% target. The policy-making group of the Federal Reserve Board had boosted rates eight times since December 2015. The agency said it would wait and see on future rate cuts.

The four-week moving average for initial unemployment claims fell for the fourth week in a row, getting closer to 50-year lows. Labor Department data show average claims down 40% from the 52-year average in a persistent indication of the tight labor market and employers’ reluctance to let go of workers. Strong employment helps encourage consumer spending.

Manufacturing growth slowed in June to the weakest pace since August 2016 but still signaled the 35th consecutive month of expansion for the sector. The Institute for Supply Management said new orders rose slightly but growth slowed for production and employment. Purchasing managers surveyed by the ISM said they remain concerned about trade policies. The trade group that their businesses continued to expand.

Employers added 164,000 jobs in July, extending the nation’s hiring record to 106 consecutive monthly gains. The pace of job growth met the average for the first half of 2019 but was behind the 223,000-jobs-per-month rate in 2018. The Bureau of Labor Statistics also said the unemployment rate stayed at 3.7%, nearly the lowest in 50 years. Average hourly wages rose 3.2% from the year before, which made 10 months in a row above 3%. A measure of underemployment that includes discouraged jobseekers and involuntary part-time workers reached its lowest level since 2000, suggesting the pool of potential workers may be drying up.

For the first time since 2005, China fell from its spot as America’s leading trading partner. The Bureau of Economic Analysis reported that U.S. exports to China fell 19% in the first half of 2019; imports from China declined 12%. Canada and Mexico surpassed China in U.S. trade. Overall, the U.S. trade deficit narrowed slightly from May but widened 7.9% compared to the first half of 2018.

The University of Michigan said its July consumer sentiment index varied only slightly from June with economic confidence remaining stable since the start of 2017. An economist with the survey said personal financial expectations rose to their highest levels since 2000. He said he’s curious to see whether U.S. trade wars with China shake U.S. consumer confidence.

The Commerce Department said factory orders rose 0.6% in June, led by commercial airline sales, which had been declining. Excluding volatile transportation orders, contracts for goods rose 0.1% from May and were up 0.7% from June 2018. Orders for non-defense capital goods excluding aircraft, a proxy for business investments, rose for the second month in a row and were up 1.8% from June 2018.