The broadest measure of inflation in the U.S. rose a bit more than analysts expected in July. The Consumer Price Index gained 0.3% from June and 1.8% from July 2018, according to the Bureau of Labor Statistics. Excluding volatile food and energy prices, the CPI also rose 0.3% for the month and 2.2% for the 12 months, the highest year-to-year increase since January.

The four-week moving average for initial unemployment claims rose for the second  week in a row, still hovering around the lowest levels in nearly 50 years. The average was 39% under the 52-year average, according to data from the Labor Department. The indicator suggests employers continue to be reluctant to let workers go, which should boost hiring and wages and raise consumer confidence to spend more.

The Federal Reserve reported that industrial production dropped 0.2% in July. Manufacturing output decreased 0.4% from June, its fourth decline in six months. Mining production, hampered by Hurricane Barry, also fell. Utilities output rose amid unseasonably hot weather. The capacity utilization rate fell to 77.5%, the lowest level since October 2017 and further below the long-term average of 79.8%, above which economists begin to worry more about inflationary pressure. That average hasn’t been reached since April 2008. 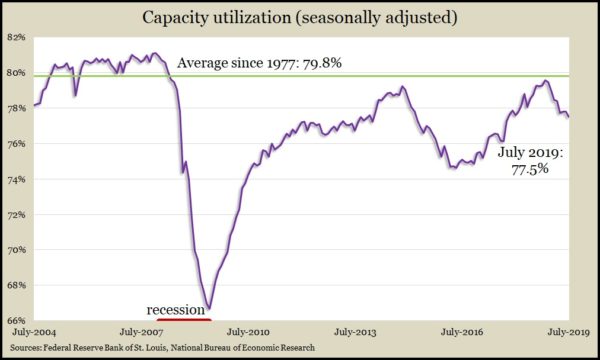 Worker productivity rose by an annual rate of 2.3% in the second quarter, down from 3.4% in the first quarter but still higher than analysts expected. The Bureau of Labor Statistics said second-quarter productivity resulted from a 1.9% increase in output and a 0.4% decrease in hours worked. Unit labor costs for the quarter rose 2.4%.

Business inventories were unchanged in June, while sales rose 0.1%, according to a Commerce Department report. Year-to-year, inventories rose 5.2% while sales increased 1.3%, suggesting an imbalance between supply and demand, which can affect companies’ responsiveness to changing business conditions. The inventories-to-sales ratio was up from June 2018.

The Commerce Department reported that the annual pace of housing starts declined and building permits increased in July, although the picture favored single-family houses. New construction of single-family residences–73% of the home-building market—rose 1.3% from June to the highest level since the post-recession peak in January. Still, housing starts remain about half of what they were in late 2005. Building permits, which tend to predict future construction, rose more than analysts expected to their highest pace since December.

U.S. consumers cut their confidence in current and near-term financial prospects, according to a preliminary August report from the University of Michigan. The longstanding consumer sentiment index dipped to its lowest level since the beginning of the year. A university economist said consumers are more uncertain because of trade tensions and more wary of recession because of the Federal Reserve’s recent cut in interest rates.