Demand for workers reached a record high in June, as U.S. employers posted 10.1 million job openings, up 6.2% from the previous record set in May. For the first time in nearly a year and a half, the number of openings exceeded the number of people looking for work, an indicator of the relative balance between demand and supply. Warehouses, stores, restaurants and hotels were among the leading businesses seeking help, according to the Bureau of Labor Statistics. Amid reopenings and widespread COVID-19 vaccinations, layoffs and firings stayed at record lows in June. More than 3.9 million workers quit their jobs in June, a sign that they’re confident about landing new jobs. 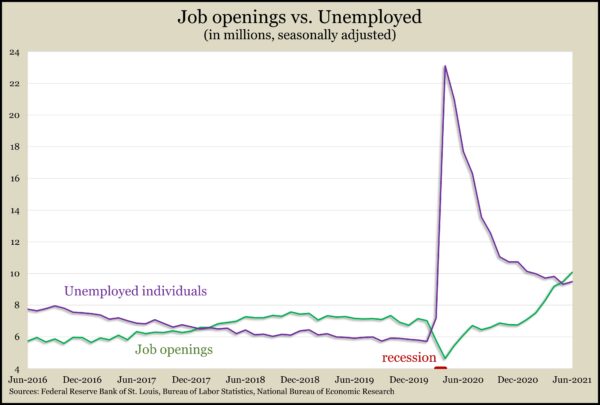 The Bureau of Labor Statistics said worker productivity rose at an annual rate of 2.3% in the second quarter. Output increased its pace by 7.9% and hours worked rose at a 5.5% rate. Compared to the second three months of 2020, productivity rose 1.9%, just below the 2.2% year-to-year average since 1948. Over the last four quarters, output rose 15.8%, surpassing its level at the end of 2019, just before the pandemic. Hours worked were still 2.8% below the pre-pandemic level. Since the second quarter of 2020, labor costs rose 0.1%, based on a 2% increase in compensation and the 1.9% gain in productivity.

Inflation remained elevated in July, though not quite as much as in June, according to a report from the Bureau of Labor Statistics. The Consumer Price Index, the broadest measure of inflation, rose 0.5% from June, the lowest increase since February. Prices for shelter, food, energy and new vehicles led the gains. Gasoline prices rose 2.4% for the month, new cars rose 1.7%. The core CPI, which excludes volatile food and energy costs, rose 0.3% from June. Compared to July 2020, the CPI gained 5.4%, tied with June for the biggest year-to-year increase since 2008. The core CPI rose 4.3% from July 2020, down from 4.5% in June, which was the highest since 1991. 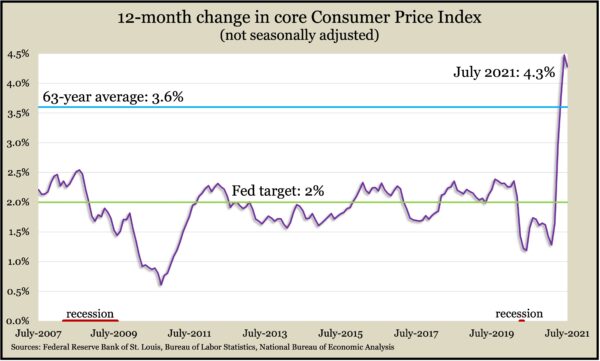 The four-week moving average for initial unemployment claims rose for the third time in four weeks, hovering about where it was in mid-June. At fewer than 400,000 new applications, the average was down from a record high of 5.3 million in April 2020 and nearly twice as high as the half-century low reached just before the pandemic, according to Labor Department data. More than 12 million Americans were claiming jobless benefits in the latest week, down 7% from the week before and less than half the 29 million recorded the year before. About 70% of the claims were through pandemic-related relief programs.

Inflation on the wholesale level rose 1% in July, led by increases in service fees, according to the Bureau of Labor Statistics. Since pandemic-plunged prices the year before, the Producer Price Index rose 7.8%, the highest in comparable measures dating back to late 2010. A core rate of wholesale inflation, stripping out volatile prices for the categories of food, energy and trade services, rose for the 13 month in a row to 6.1%, also a high in data going back to 2014.

The University of Michigan said the delta coronavirus variant sent consumer sentiment plunging from the end of July. The sentiment index dropped to 70.2 in mid-August from 81.2 in July. The measure was below the 71.8 mark hit in April 2020, when widespread shutdowns emerged at the onset of the pandemic. Consumer confidence dropped broadly among survey respondents in what a university economist described as “a mixture of reason and emotion.”