The U.S. services sector continued expanding in March and at a record pace, according to the Institute for Supply Management. The trade group’s services index showed the 10th consecutive month of growth, expanding all but two of the latest 134 months. Purchase managers surveyed for the index credited the lifting of pandemic restrictions for unleashing pent-up demand. Amid the growth, they expressed concerns for capacity constraints, material shortages and human resources challenges.

A report from the Commerce Department showed manufacturing orders declining 0.8% in February, the first setback in 10 months. Disruptions from winter storms in the South as well as supply bottlenecks for certain items help explain the drop. Orders were up 1% from February 2020. They rose 1.9% excluding transportation equipment. A proxy for business investments declined 0.9% for the month but was up 8.6% from the year before.

U.S. employers posted nearly 7.4 million job openings in February, the most since January 2019 and the second month in a row above the pre-pandemic mark. The Bureau of Labor Statistics showed more openings and hiring at restaurants and hotels, which have suffered more than most workplaces in the last year. Over all, job separations still outnumbered hires by 8.6 million positions since the pandemic began.

The U.S. trade deficit grew 4.8% in February to a record gap of $71.1 billion. The deficit, which detracts from gross domestic product, resulted from the value of imports rising at a faster rate than exports, a sign that the economy in the U.S. is recovering from the year-old global pandemic faster than among its trading partners. The moving three-month average, which smooths the deficit numbers month-to-month, also hit a record, widening 1% from January, with imports gaining 0.7% while exports rose 0.6%. 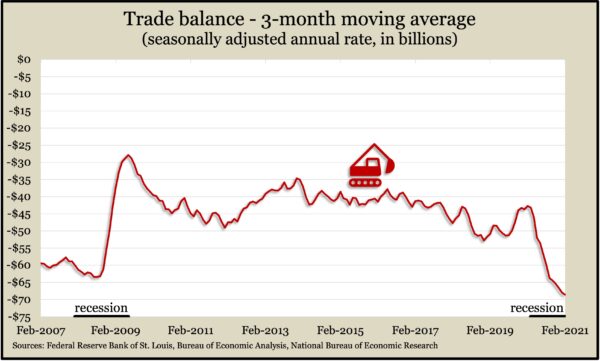 The Federal Reserve reported that consumer credit card debt rose in February for the first time in a year. With consumer spending driving about 70% of U.S. economic activity, credit card debt can signal consumers’ ability and willingness to spend. Since peaking just before the pandemic, such debt is still down $123 billion or 11.2%. In The Great Recession, it took almost 10 years for credit card debt to recover. 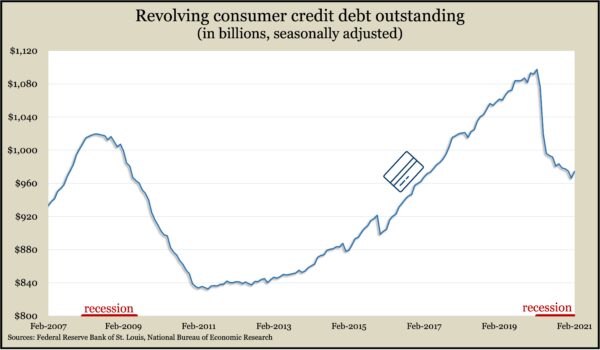 The four-week moving average for initial unemployment claims rose for the first time in nine weeks, hovering at historically high levels. Average claims were at about 724,000, up from a 51-year low of 208,000 in February 2020. The pre-pandemic high was 668,000. The Labor Department said 18.2 million Americans were receiving unemployment benefits in the latest week, up from 3.4 million the year before.

Inflation on the wholesale level increased 1% in March and was up 4.2% on a 12-month basis, the highest since September 2011. The Bureau of Labor Statistics said its Producer Price Index showed an 8.8% rise in gasoline prices the biggest contributor to inflation since February. Excluding volatile food, energy and trade service prices, the index rose 0.6% for the month and gained 3.1% from March 2020. The one-year increase in the core index was the highest since September 2018.