Demand for existing houses rose in February for the second month in a row, according to the National Association of Realtors. The trade association’s pending home sales index rose 2.4% from January and 9.4% from February 2019. Even though the data predated more recent fallout from the COVID-19 pandemic, an economist for the group noted that houses already were taking longer to sell.

The year-to-year rise in housing prices continued to accelerate in January. The CoreLogic Case-Shiller home price index rose 3.1% in January for the 20-city composite index, up from 2.8% in December and the seventh consecutive month of rising rates. Before disruptions from the novel coronavirus, economists generally anticipated further growth in the U.S. housing industry in 2020 because of low mortgage rates and full employment conditions. The Case-Shiller index had been above its April 2006 peak every month since January 2018.

The Conference Board reported a steep decline in consumer confidence in March as its monthly confidence index sank mostly because of dashed hopes for the near-term economy. That consumers remained relatively upbeat about current conditions reflected a belief that the economy “was on solid footing” at the time of surveys, the business research group said. But an economist with the group suggested a “severe contraction” with further erosion of confidence ahead.

After two months of weak recovery, the manufacturing industry returned to a recession in March, according to an index from the Institute for Supply Management. Purchasing managers surveyed for the index cited oil-price wars and the spread of the novel coronavirus for interrupting supply chains and curtailing demand. New orders and employment components declined to their lowest points since the Great Recession.

The Commerce Department said the annual rate of construction spending declined 1.3% in February. Analysts had expected an increase in the volatile indicator. Pace had quickened by 6% from the year before, with housing leading the way. Specifically, single-family residential spending rose 11.3% from February 2019. Government spending on construction fell 1.5% for the month but was up 7.4% from the year before.

The four-week moving average for initial unemployment claims more than doubled the record high set the week before, with 2.6 million new applications. The Labor Department cited job displacements related to widespread COVID-19 shutdowns for the one-week spike in claims of 6.6 million, also doubling the record set the week before. Economists suggest the claims undercount employment repercussions from the pandemic because many workers don’t qualify for unemployment insurance.

The U.S. trade deficit narrowed in February to its smallest gap since September 2016, the Bureau of Economic Analysis reported. The deficit shrank 12.2% to $39.9 billion with the value of exported goods and services declining 0.4% and imports falling 2.5%. Year-to-year, the trade gap closed by 18.7% with exports rising 0.3% and imports down 3.6%.

A slight decline in factory orders in February was the third drop in demand in four months. Department of Commerce data showed the manufacturing picture looked even weaker if volatile transportation or defense orders were excluded. Orders for non-defense capital goods excluding aircraft—a proxy for business investments—fell for the second time in three months.

Employers cut 701,000 jobs in March, the first job losses after a record 113 consecutive months of gains. The Bureau of Labor Statistics cited the COVID-19 coronavirus and efforts to contain it but also noted that most of its monthly jobs data was obtained before many employers began to close. About two-thirds of the job losses were in the leisure and hospitality industry. The unemployment rate rose to 4.4% from near a 50-year low of 3.5% in February, the largest increase since January 1975. 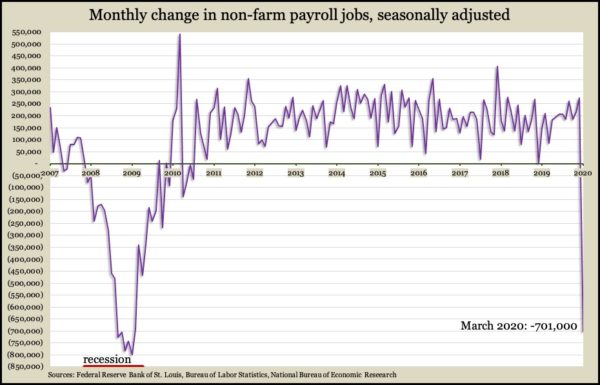 The Institute for Supply Management said its non-manufacturing index dropped in March but still suggested the industry was growing. The trade group said its index reading marked the slowest growth since mid-2016. A component covering business activity reached its lowest mark since the end of the last recession. Purchasing managers surveyed for the report complained of slowdowns in both supplies and demand.