For What It’s Worth: Palm Grease 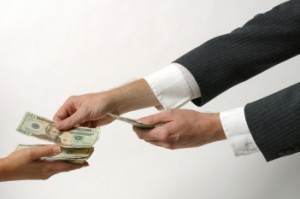 A recent article about a popular bar in Washington, D.C., noted that lines to the door have been so long that wannabe customers have resorted to bribing their way in.

“If you don’t want to wait,” the article in the Washingtonian advised, “save the palm grease and buy a $20 ticket for timed entry.”

The practice of slipping someone a bribe and saying you’re greasing their palm has been going on for centuries.

The Oxford English Dictionary describes “palm-grease” as “Money, especially when given as a bribe or inducement.” But where does that come from?

I have been writing about the etymology of curious financial expressions off and on since 1987, when I was a reporter at the Rochester (N.Y.) Times-Union. Since then, the internet has vastly improved access to research material, but once in a while, terms remain without a clear-cut map of their origins. In such cases – as with palm grease – we’re left to connect the dots on the various partial explanations that are available.

One of my favorite reference books for word histories, the Morris Dictionary of Word and Phrase Origins, lists “grease” as a synonym for money under entries for both “simoleon” and “payola.” (As a reflection of its importance, money has a nearly endless list of nicknames.)

The American Heritage Idioms Dictionary suggests that to grease someone’s palm or hand was first mentioned in the first half of the 1500s and that “grease” is used in the sense of “enrich.”

What’s interesting about that is that oindre is the French verb “to anoint.” In that context, to grease someone’s palm is to anoint someone, to heal them, to enrich them, even to bless them – but to do so in a manner that can be out of view, even under the table.

My initial notion was to equate “greasing someone’s palm” with “greasing the skids,” which entails helping things runs smoothly. However, this sense of anointment would suggest we’re not talking about grease as a lubricant as much as an unguent, an ointment, a balm.

The purpose of palm grease is to smooth the way for the person paying it – to skip ahead in the line to that bar in Washington, for instance. But it’s supposed to work because it enriches the person receiving it.