Bob’s View: Focus on What Matters

When it comes to our investments, we need to focus on issues that really matter and let go of issues that don’t.

Here’s another disconnect between Washington and Wall Street: Wall Street is not all that concerned about the federal deficits, but it seems that’s all the politicians are meowing about right now.

I think it’s important to identify that proverbial canary in the coal mine. Follow the yield on the 10-year Treasury. The yield started the year at 3.3%. We’re now at 3.06%. The yield has dropped, which means prices have risen.  So investors are willing to pay more for Treasury debt now than they were in the beginning of the year.

I think there are significant problems with long-term structural deficits, but Wall Street – the big money out there – is not too concerned. If they were, the yield on the 10-year Treasury would be a whole lot higher than what it is. Historically, it averages more than 6% – and we’re half that now. So the big money doesn’t worry about not getting repaid by Uncle Sam. It’s only the politicians that are yapping about the problems with the deficits. 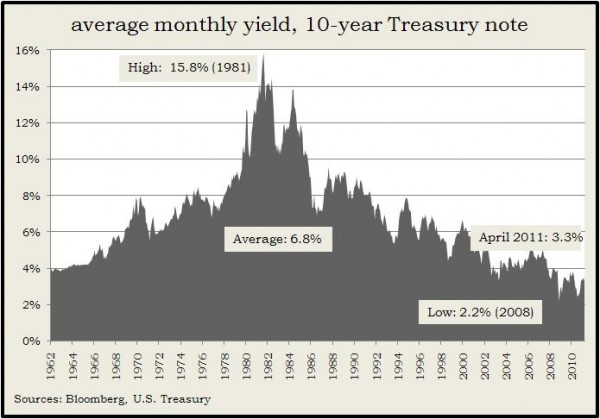 Always watch what big money is doing. Disregard, even be dismissive of what the politicians are saying. Follow the money.

You know, on average, our balanced portfolios are up about 4.5% for the year. It is only May. The way I do math, we’ve got a pretty good year going.

At this point, most people have to sit back, take a big breath, let out a sigh of relief and say that we’re heading out of the dark period. And we’re heading toward the light at the end of the tunnel.

It was just a couple of years ago that most people thought we were heading to hell in a hand basket, and it’s remarkable, in my opinion, what a difference nine months have made.

The economic indicators paint a compelling picture of an economy that has passed the recovery stage and clearly is expanding.

We can make a definitive case for having turned the corner. We’re no longer just a recovering economy. We’re an economy in an expansionary phase.

A recovering economy doesn’t have the wherewithal to absorb a shock to the system or a hit to the head. A healthier economy has the ability to absorb that external shock. Each day that goes by, the economy is stronger.