A slowdown in the global economy has been looming over the U.S., darkening the horizon, stirring head winds.

For more than a year, meeting minutes have shown Federal Reserve leaders referring to the world’s financial state as weak or soft or slowing, always in the context of challenges to the U.S. economy.

In its latest semiannual forecast, the International Monetary Fund calls the world economic outlook “precarious,” slowing to 3% in 2019, the narrowest pace since the worldwide financial crisis of 2008.

Only a couple of years ago, the world’s major economies were enjoying a rare period of synchronized growth: Other countries were fanning U.S. economic momentum. Since then, much of the world has stalled.

Although the U.S. remains far and away the world’s largest economy, its dominance is shrinking, making it more susceptible to forces abroad. According to data from the World Bank, America’s share of global gross domestic product rose to 25.2% in 2000 then fell to 21.6% by 2018. 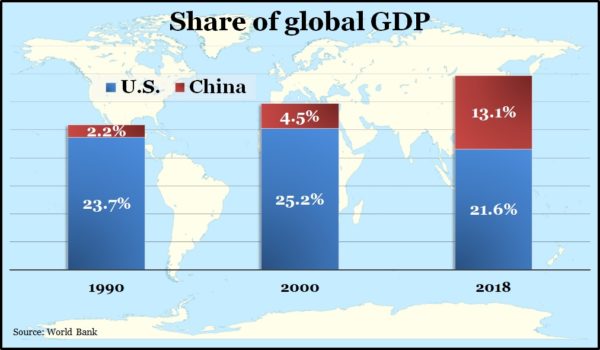 Meantime, the second-leading economy, China, grew to 13.1% from 4.5% in 2000. China’s cut into the U.S. lead dramatizes the escalating trade war between the two countries, which has aggravated concerns about the global slowdown.

World commerce matters to investors. Weak business conditions worldwide are a drag on investments overall. FactSet recently estimated that large U.S. companies receiving more than half of their revenue from outside the U.S. were looking at a 7.4% decline in third-quarter earnings. Companies in the S&P 500 that were more U.S.-centric expected 0.4% earnings growth for the quarter.

Diluting the effect of global slowing is the fact that, more than elsewhere, the U.S. economy is less reliant on international commerce. Outside of the U.S., exports account for 36% of gross domestic product, according to the World Bank, vs. only 12% for the U.S., 20% for China and 47% for Germany.

Bob Landaas notes that forces abroad have yet to pull the U.S. economy into a recession.

Instead of relying so much on other countries to buy its goods and services, the U.S. depends more on domestic consumers, whose spending accounts for about 70% of national GDP. With unemployment at a 50-year low, lower household debt payments and greater wealth through the rising value of stocks and homes, consumer spending looks promising.

“Consumers alone probably can’t overcome all the head winds the U.S. economy faces, including weak manufacturing and global trade,” Kyle wrote recently. “However, strong showings from consumers through the end of 2019 should help us imagine what pattern might take shape when those head winds diminish.”

Even though a slower global economy should not alarm most U.S. investors, it’s worth monitoring. At the same time, it’s not worth trying to avoid overseas investments. Being part of the global market is essential to a balanced portfolio, Marc Amateis says in a Money Talk Video.

“Number one, you want it for diversification,” Marc explains, “spreading your money around, exposing it to different forces at different times. But beyond that, I think it’s opportunity.”

Indeed, overseas stocks could be primed for a resurgence in coming years, Bob Landaas says. After lagging U.S. performance since the financial crisis, emerging market stocks have more attractive valuations, including ratios of price to earnings, price to book and price to cash flow.

“While we currently have better growth,” Bob says. “The tides will eventually shift.”