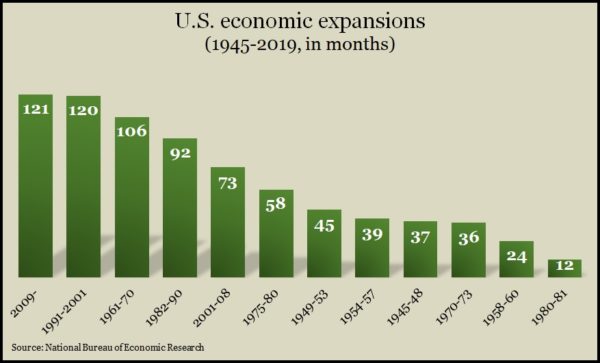 The U.S. economy is in uncharted waters. It has been expanding for more than 10 years—an unprecedented streak, based on National Bureau of Economic Research calculations dating back to 1854.

As with bull markets for stocks, economic expansions don’t die of old age, but some people just get anxious when they think there’s been too much of a good thing.

“They think that something bad has to happen soon,” Dave Sandstrom says. “Fear of the end can cause some investors to make bad decisions.”

And because the current record growth followed the 18-month Great Recession—which included the biggest sell-off in stocks since the Great Depression—some of the fear is that the next recession will be as bad as the last, or worse. “Which is not necessarily true,” Dave says.

In fact, several signs suggest that the expansion still has some legs to it.

For instance, the Conference Board said in July that its index of leading economic indicators shows continued economic growth, although slower, at least through the end of the year. Also, the Federal Reserve Board lowered short-term interest rates for the first time in 11 years. Often, recessions result from the Fed raising rates to combat inflation, but inflation has been too weak to satisfy the Fed’s target.

On the other hand, possible hints of a pending recession have cropped up, including an inverted yield curve since mid-May.

The latest quarterly outlook from forecasters surveyed by National Association of Business Economists puts the odds of recession in 2019 at only 15%, rising to 60% in 2020. But investors shouldn’t rely on economic predictions.

“It’s very difficult, if not impossible, for most economists to predict recessions with any degree of accuracy,” Bob Landaas said in a recent Money Talk Video.

Never knowing for certain when the economy is going to swell or swoon, advisors recommend that investors balance the assets in their portfolios to be prepared for both over the long haul. The fact that the U.S. economy has hit a record should not prompt shifts in investment strategies, they say.

“Revisit your plan,” Marc Amateis says. “You should have a plan. You should know what that plan is. You should know what you want your allocation mix to be.” If your preferred mix of stocks and bonds and other assets is a bit off, Marc says, “It’s a great time to rebalance back to that mix. You wanted to be there for a reason.”

In rebalancing, Adam Baley recommends considering trimming gains from stock funds that have performed well and holding enough in high-quality bonds to meet short-term needs when the economy eventually contracts. He says a proper mix also should have balance between growth-oriented stocks and dividend-paying value stocks.

“At the end of a market cycle, investors tend to bet on the hopes and dreams of growth stocks and forget about the cold, hard cash of a dividend,” Adam says. Historically, he notes, value stocks have outperformed growth stocks over long periods and tend to hold up better during market turbulence.

“It’s a blip on the screen,” Art Rothschild says of the record expansion. “Whenever it ends, whenever the next one starts, we don’t know. Nobody knows. So, it’s this healthy agnosticism, which requires us, as professionals, to constantly keep our clients balanced.”

The bottom line for investors is not to be swayed by peripheral events. The current span of economic growth may be one for the history books, but it’s no reason to second-guess longstanding investment tactics.

“Focus on your portfolio,” Art says. “Focus on your asset allocation. Remain balanced, and realize that whenever the expansion ends, it’ll resume again.”

Interest rates, corporate earnings and valuations are what matter most to investors in the long run, Marc says.

“The record expansion in itself is meaningless. Look at the underlying fundamentals. That’s what’s important,” Marc says. “Is the economy expanding? Is the interest rate environment low? Are valuations reasonable, even though they might be above average? Are corporate profits good? Are companies making money?”