Don’t underestimate how much you’ll change 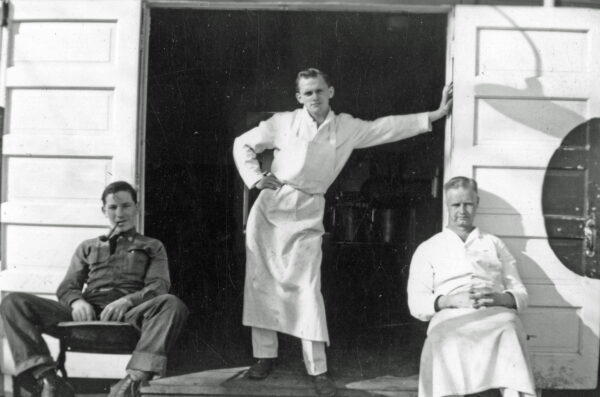 Dec. 30 marked my father’s centennial. To help make sense of the occasion, I’ve been browsing through old photos and notes and more than eight hours of interviews my nephew and his wife recorded with my parents in 2005.

What a varied and unpredictable life Dad led! Yet, in retrospect, some of the dots connect.

For instance, he couldn’t have imagined when he took a home economics class in high school that he’d later be working as a cook in the Civilian Conservation Corps in northern Wisconsin—nor that he would be preparing meals for colonels in the Philippines in World War II.

My father’s life—all 88 years of it—was one of a kind. Just like him, though, all of us change over time. That shouldn’t be news to anyone. And yet, when we’re looking ahead—including planning for retirement and beyond, our expectation is that we’ll continue to be who we are now. We fail to acknowledge that change in our lives is constant.

Psychologists term this blind spot “the end of history illusion.”

“People expect to change little in the future, despite knowing that they have changed a lot in the past,” psychology researchers wrote in the journal Science. “This tendency bedevils their decision-making.”

For instance, say my father had returned from the war and considered himself an accomplished cook who thus should pursue cooking as his calling. Instead, Dad went back to working at a paper mill. My older siblings remember Dad’s cooking better, but we would all agree that he was better suited as a papermaker.

My dad’s birthday coincides with annual reminders of characters such as Ebenezer Scrooge and George Bailey who learn that their lives are always works in progress and that further change awaits them.

Keeping in mind that somehow our personality, tastes and values will change—just as they have in the past—can help us be more open-minded and flexible in our planning. We shouldn’t prepare for the future assuming we’ll always be who we are now.

According to the 2020 Retirement Confidence Survey, 31% of workers expect to stay employed up to age 70. However, only 6% of retirees actually work that long. Regardless of why they retired early, they shortchanged their retirement if they planned to work longer.

The mistaken notion that our history has ended is akin to the “recency bias,” through which people confer greatest significance on what just happened. It’s what compels investors to manage their money as if the markets will keep repeating their most recent performance.

“It’s human nature for us to get used to what’s just been happening and then expect that to continue into the future,” Dave Sandstrom explained in a Money Talk Video. “What that typically does is forces (investors) into making bad decisions.”

In both the end-of-history illusion and the recency bias, people fail to account for the long term—to recognize the shifting, haphazard paths that got us to where we are and to realize that the way forward is just as fickle.

We crave to know the future, but it’s not possible. So instead, we plan and invest relying on only the second of Scrooge’s ghosts. We look back only as far as what we can remember from the mirror this morning and where we saw the stock market close last Friday.

“In short, people may confuse the difficulty of imagining personal change with the unlikelihood of change itself,” the psychologists wrote.

The psychologists’ research examined more than 19,000 people, ages 18 to 68. When asked to look back at their previous 10 years, subjects reported how much their personalities and core values had changed. When asked to look forward a decade, however, they predicted they would stay the same. The respondents were consistent, regardless of age.

“Both teenagers and grandparents seem to believe that the pace of personal change has slowed to a crawl and that they have recently become who they will remain,” the researchers said. “History, it seems, is always ending today.”

One way for investors to counter recency bias is to keep their portfolios balanced between assets that contribute to the long term and fixed-income investments that are less volatile.

“It’s pretty difficult to forecast during a pandemic. It’s challenging, perhaps even impossible, short term,” Bob Landaas explained in the online 2021 Investment Outlook Seminar. “So that’s, to me, the beauty of asset allocation is that your portfolio is designed to take you through thick or thin.”

By balancing assets based on historic correlations, investors can face the future honoring the longer trends and not the latest headlines, Bob said.

“Forecasting is almost impossible, with so much uncertainty out there,” he said. “So, you can rest assured of knowing that your model should stand the test of time.”

To plan for ourselves while disabusing the illusion that our history already has ended, one of the psychologists recommends finding your future self in the form of others.

“The best way to predict your future, we’ve discovered, is not to close your eyes and use your imagination,” Dan Gilbert, of Harvard University, said in an interview with NPR. “There’s a completely different way to figure out how you will feel, and that is to ask people who are already in your future how they feel.”

In other words, seek out individuals already leading the life you imagine for yourself five or 10 years from now. Ask them to reflect on how they have changed since they were where you are now. Again, your lives are different, but at least it gets you thinking about the role that your ongoing evolution could play in your plans.

I don’t have my father anymore to tap that experience. But I have eight hours of interviews from which to learn. I also have an older brother and a number of friends preceding me in retirement.

In reviewing what I can of my father’s life, I get a feel for how he changed. At various points, he had different joys and worries, different triumphs and obstacles, different aspirations and disappointments.

When my younger sister was leaving home, my siblings and I dreaded what would happen to our parents. They had kids underfoot—seven of us—for 39 of their first 40 years of marriage. We couldn’t fathom how they would cope on their own without any of us there.

Just fine, as it turned out.

My siblings and I didn’t consider that my parents had been through much greater trauma in their lives than becoming empty nesters. For instance, they withstood the uncertainty of war when Dad was separated for a year and a half from my mom and my two oldest brothers, both under the age of 3.

Recollecting such stories and sharing them with family, I appreciate how my father’s history still hasn’t ended. His life shows me that further change lies ahead.