Last summer, we still were talking of the potential for a double-dip. But later in August, it became apparent we weren’t going to go back into recession, and we turned the corner before the end of this past year, transitioning from an economic recovery to an expansion.

The typical business cycle lasts four to five years. We’re about halfway through this one, but we’re knee-deep in the expansion phase.
And what interests me is the fact that there’s very little upward pressure on interest rates. That typically is what derails expansionary phases in the business cycle, as the Fed starts raising rates just enough to break the camel’s back, and the cycle starts all over again.

“It’s wrong for people to manage their affairs as if inflation is imminent.”

I’m encouraged by the fact that there doesn’t appear to be much upward pressure on rates. Everybody’s been talking about that for a while.

But the latest reports show core inflation continuing to be under 2%. It’s going to be pretty difficult for inflation to rear its ugly head in the near future.

Officials from the Federal Reserve keep saying the firmness in commodities prices and the oil price spike would be short-lived, and that they don’t anticipate inflation rising.

It’s not that inflation can’t go up, and it’s not that it even won’t go up. But I think it’s wrong for people to manage their affairs as if inflation is imminent.

Frankly, I don’t see how it can be with the economy as weak as it is still.

I’ve been at this so long that I can cite chapter and verse on everybody’s worries as you go through the business cycle.

The reason why I’m going down this road is it’s becoming more and more apparent that rising rates will not be an in-your-face type of issue. 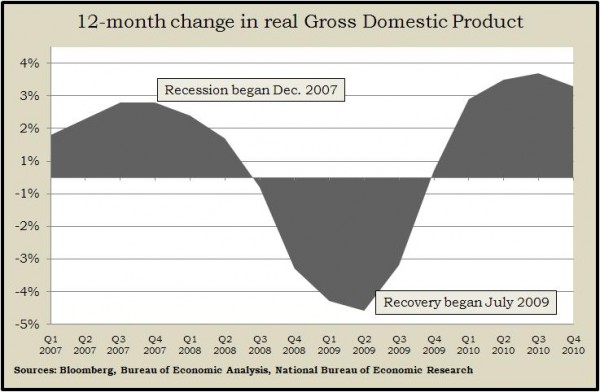