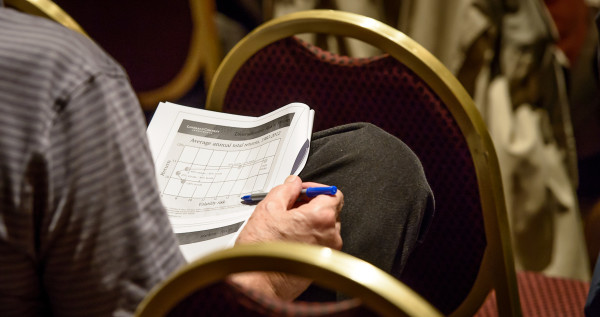 Click here for the answers – AFTER you take the quiz.
View our recording of the seminar by clicking here.

1. Name the two fundamental determinants of whether stock prices go up or down over the long run.

2. Economists have estimated that sequestration – raising federal taxes and cutting federal spending – had what effect on the U.S. economy in the first half of 2013?

3. True or False? Corporate profits have never been higher.

4. Recent trends toward developing-nation markets have been reversing. Which of these is NOT a factor in that global economic shift?

a. The unusual nature of the U.S. recovery from the Great Recession.

b. The slowdown of China’s economic growth.

d. The rise (and potential rise) in U.S. interest rates.

5. True or False? U.S. inflation is nearing the historic average.

6. Which statement about the U.S. budget deficit is correct?

a. It is at a record high, both in dollar amount and as a percent of GDP.

b. It is at a record high in dollar amount, but not as a percent of GDP.

c. It is at a record high as a percent of GDP, but not in dollar amount.

d. It is not at a record high, neither in dollar amount nor as a percent of GDP.

7. True or False? The U.S. economic output has never been higher.

8. Bond prices move in the opposite direction of interest rates in proportion to the bond’s duration. Which of these formulas best illustrates that?

9. What lesson should investors take from the Federal Reserve’s eventual tapering of its $85 billion-a-month bond-buying program?

a. The Fed considers the bonds it’s buying an unwise investment.

b. The Fed considers the U.S. economy strong enough to keep growing without needing the bond buying as stimulus.

c. The Fed is giving up and abandoning its efforts to help the U.S. economy.

d. The Fed is running out of money for U.S. economic support.

10. Which is the bigger number?